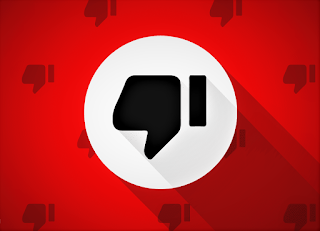 There are many disliked videos on YouTube, but did you ever wondered which are the most disliked YouTube videos in the world?

From almost billions of videos on YouTube, these 10 videos top the list of most disliked videos of all time globally.

Without any further ado let’s get started.

This video “Flores” uploaded by a singer named Vitao has uploaded 7 months ago and it has over 5.4 million dislikes with a dislike rate of 69.69%.

Bath song by CoComelon Nursery Rhymes has billions of views, though a nursery rhyme it has 6 million dislikes(funny right?) with a dislike rate of 40.99%.


Learning colors by Мирошка ТВ is another animated video by kids and funnily it has more dislikes which count to 7 million dislikes and a dislike rate of 40.18%.


This video by LooLoo Kids which is a music video for kids has 8.7 million dislikes with a dislike rate of  39.96%. The video is based on a very popular English-language nursery rhyme Jhonny Jhonny.

Also Read:  Top 10 Most Expensive Apps in the World


YouTube rewind 2019 is a part of YouTube rewind series and was uploaded on YouTubes’s official channel. It has 9.4 million dislikes with a dislike rate of  73.03%.

There is no way you have not heard or watched this famous kids music video by Pinkfong. It is the most-watched video on youtube with over 11 million dislikes with a dislike rate of  31.21%.

A famous album by Justin Bieber which was his official debut song got Justin Bieber into the limelight with billions of views the video hit our list of most disliked videos of YouTube at number 3rd position.
It has 12 million dislikes with a dislike rate of 42.03%.


Sadak 2 is a Bollywood film which is a sequel to a popular film Sadak starring Sanjay Dutt. The trailer and the cast faced trolling after the death of a popular Bollywood actor Sushant Singh Rajput as people blamed nepotism for the heart-wrenching news of Sushant’s suicide.

Sadak 2’s trailer was released on August 12, 2020 and faced vote brigading owing to the nepotism debate sparked after the suicide of Indian actor Sushant Singh Rajput. Speculating that Rajput had been upset over being shut out of the film industry, due to hiring practises that favoured children of established film personalities, Rajput’s fans blamed notable people in Bollywood, including Sadak 2 director Mahesh Bhatt and his daughter Alia.

The trailer has 13 million dislikes and 94.78% dislike rate.


YouTube rewind 2018 is also a part of YouTube rewind series and it was uploaded on YouTube’s official channel. This video became the most disliked videos of all time in just 7 days.

According to Forbes, the reason why YouTube’s rewind of 2018 was the most disliked video of all time was, “Why YouTube Rewind 2018 was so disliked by its own community was that it focused more on its advertisers than its community.  While Walmart Yodeling Kid thankfully made it into the video, similar internet phenomenon like T-Series and Johnny Johnny Yes Papa was not even mentioned. These more relevant YouTube allusions were replaced with overdone Fortnight references.”

So these videos are the top 10 most disliked videos on YouTube in the world but this not about to make fun of such videos which face criticism by the viewers.

The motive of this article was just to share knowledge and not to criticize the uploaders and their craft.


I hope you liked this article.


Do comment down below which video among these you hate the most and why and do not forget to share it with your friends.

Top 10 Most Expensive Apps in the World