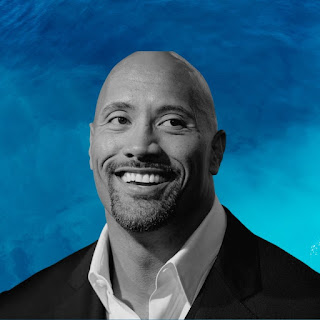 Dwayne Johnson, popularly known as “The Rock” is one of the world’s highest-grossing and highest-paid actors and has a large fan following all over the world with over 259 million followers on Instagram.

However, Dwayne Johnson’s life was loaded with many hardships, from being evicted from his childhood home to being arrested multiple times when he was 16 and fighting with depression, he has seen the tough times but never lose hope.

He has inspired millions to achieve their dreams like he has achieved his, and that’s why I brought you some of his best and most inspiring quotes on success, hard work, workouts, and more which will motivate you to achieve your goals.

So let’s get started with our list of 55 quotes by Dwayne Johnson.

Quotes By Dwayne Johnson: The Rock 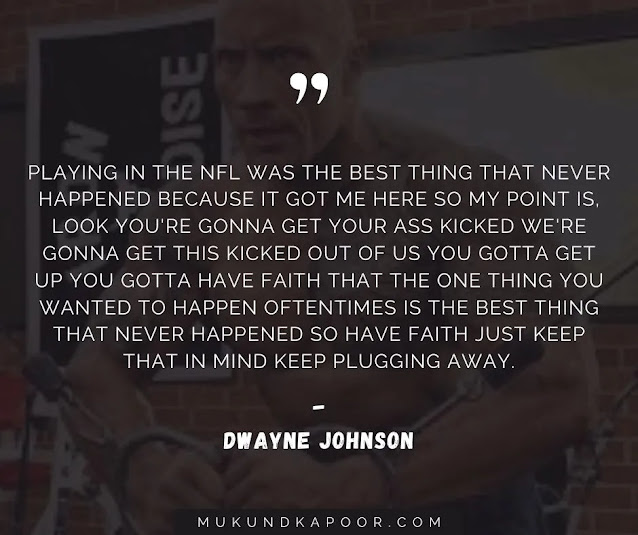 1. “Playing in the NFL was the best thing that never happened because it got me here so my point is, look you’re gonna get your ass kicked we’re gonna get this kicked out of us you gotta get up you gotta have faith that the one thing you wanted to happen oftentimes is the best thing that never happened so have faith just keep that in mind keep plugging away.” – Dwayne Johnson

2. “I’m always asked, ‘What’s the secret to success?’ But there are no secrets. Be humble. Be hungry. And always be the hardest worker in the room.” – Dwayne Johnson 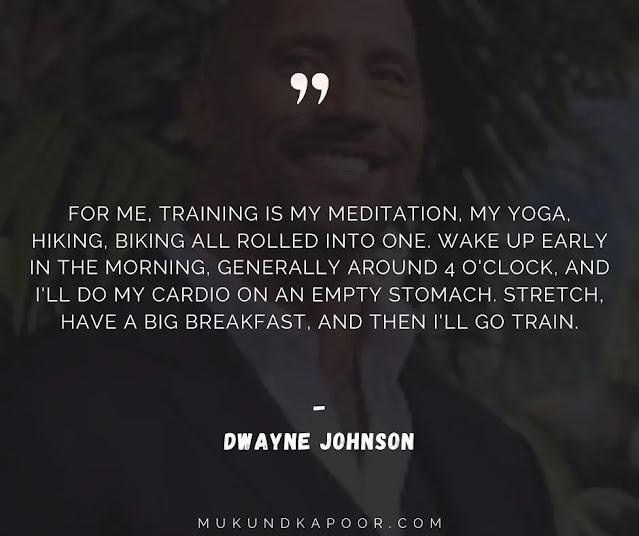 5. “Check your ego at the door. The ego can be the great success inhibitor. It can kill opportunities, and it can kill success.” – Dwayne Johnson

6. “For me, training is my meditation, my yoga, hiking, biking all rolled into one. Wake up early in the morning, generally around 4 o’clock, and I’ll do my cardio on an empty stomach. Stretch, have a big breakfast, and then I’ll go train.” – Dwayne Johnson 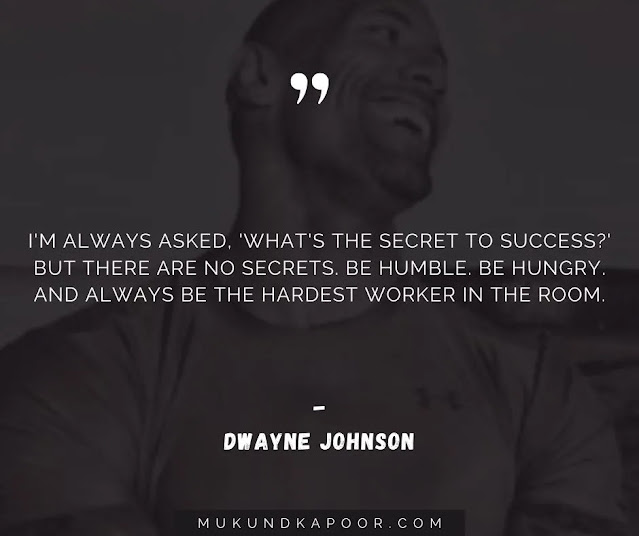 7. “Being a true bad ass has no weight or gender requirement – just 100% commitment to greatness.” – Dwayne Johnson

8. “I’m always asked, ‘What’s the secret to success?’ But there are no secrets. Be humble. Be hungry. And always be the hardest worker in the room.” – Dwayne Johnson

9. “I like to use the hard times in the past to motivate me today.” – Dwayne Johnson

10. “I want to be a man who is truthful and who won’t let pride get in the way of my ripping myself open to my partner and saying, ‘Here I am. This is me.’ I feel there’s something powerful when a man reaches a point in his life when he can be completely vulnerable.” – Dwayne Johnson 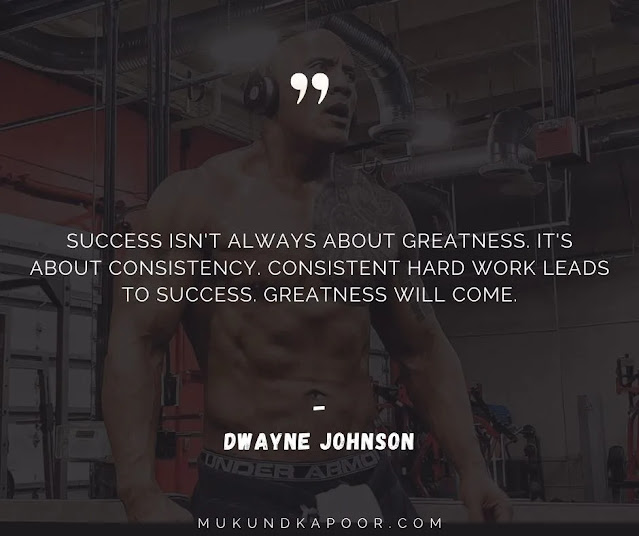 11. “The men I idolized built their bodies and became somebody – like Sylvester Stallone and Arnold Schwarzenegger – and I thought, ‘That can be me.’ So I started working out. The funny thing is I didn’t realize back then that I was having a defining moment.” – Dwayne Johnson

12. “I love making people laugh and feel good, and that’s awesome and special for me to be able to do that, but there really is nothing like kicking ass whether it’s on a major scale, or whether it’s in more of a dramatic fashion. Being physical and taking care of business the old-fashioned way is something that I love doing.” – Dwayne Johnson

13. “Don’t be afraid to be ambitious about your goals. Hard work never stops. Neither should your dreams.” – Dwayne Johnson 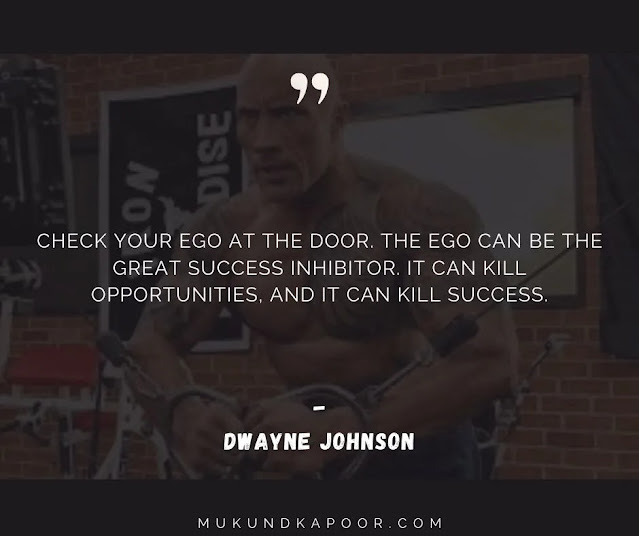 14. “One of the most important things you can accomplish is just being yourself.” – Dwayne Johnson

15. “The first step to achieving your goal, is to take a moment to respect your goal. Know what it means to you to achieve it.” – Dwayne Johnson

16. “Remember where you came from? Keep that shit in the front of your mind and when shit goes bad It goes sideways a lot of shit Does you’re getting booed out of the fucking building or coming through this injury or people? Are you writing you off? Are you guys gonna fucking make it you know any of that shit? You got it. You gotta keep it in here And it really has to. It should drive you.” – Dwayne Johnson 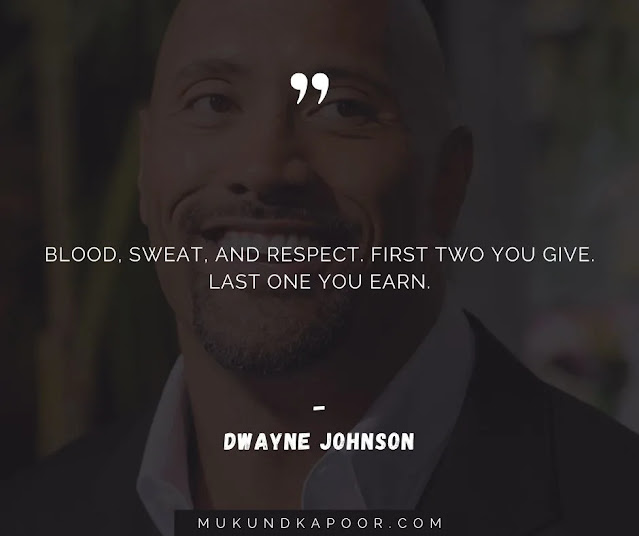 17. “I was evicted when I was 14 we were kicked off the island we couldn’t live in Hawaii, had no place to live a lot of sh*t happen then. When I moved to Nashville, I was arrested multiple times by the time I was 16 years old. I Got to remember that and it allows me then to be present in the moment and understand holy sh*t that’s the stuff I have around me right now this is this sh*t that I dreamed up when I was a kid, I am here.” – Dwayne Johnson 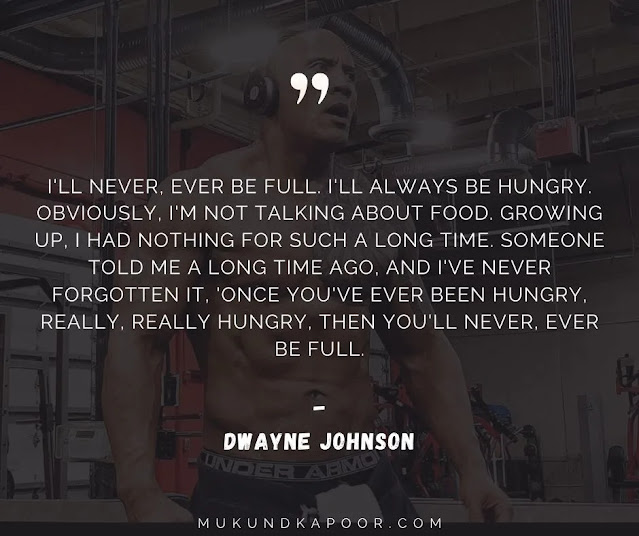 18. “When you walk up to opportunities door, don’t knock it… Kick that b*tch in, smile, and introduce yourself.” – Dwayne Johnson

19. “You don’t need directions, just point yourself to the top and go!” – Dwayne Johnson

20. “Be the person that when your feet touch the floor in the morning the devil says, “awe s***.. they’re up.” – Dwayne Johnson

21. “If something stands between you and your success – move it. Never be denied.” – Dwayne Johnson

22. “Think back 5 yrs ago. Think of where you’re at today. Think ahead 5 yrs and what you want to accomplish. Be Unstoppable.” – Dwayne Johnson 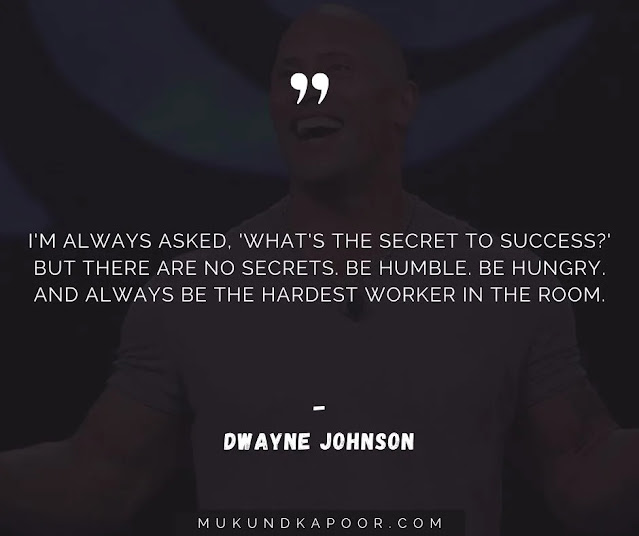 23. “I like the idea of working in different genres and transcending genres and hopefully finding success, and ultimately make movies people like.” – Dwayne Johnson

24. “I want someone who can trust that my big hands are going to take care of them.” – Dwayne Johnson

Also Read:  40 Devdutt Pattanaik Quotes That Will Blow Your Mind

25. “I’m very low-key. I don’t really blend in, so it’s difficult to go out in public. I like to do things that are kind of quiet, whether it’s a dinner at my house or a restaurant, or a movie night at home.” – Dwayne Johnson

26. “You don’t sign up for a divorce when you get married. It’s very painful. But it’s taught me a great deal about myself.” – Dwayne Johnson 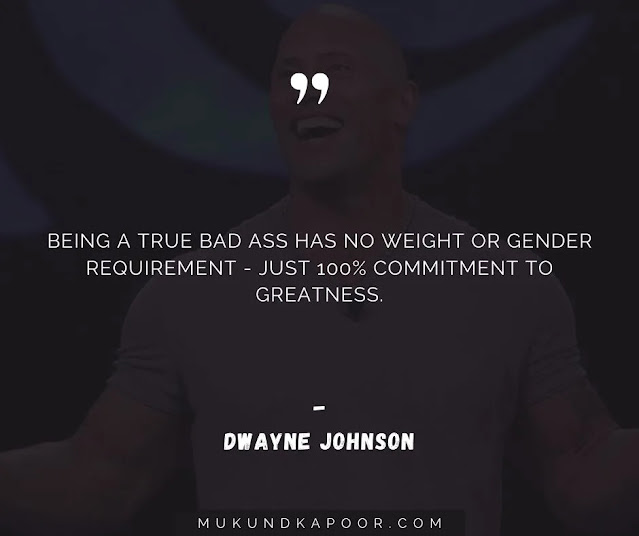 27. “I guess the moral of the story is the importance and the power of finding your identity and being true to who you are. Even in that wild world of pro wrestling it still applies to everyone in the room and how powerful that could be because it was a true shift and click moment, and I never looked back and I became, fortunately, the biggest draw that the business has ever seen.” – Dwayne Johnson

28. “Training for me is a metaphor for life, period. The dedication, the determination, the desire, the work ethic, the great successes, and the great failures – I take that into life.” – Dwayne Johnson

29. “I have a little belief that success is never unrelenting. And if success is what we chase – then neither are we.” – Dwayne Johnson

30. “You don’t just find the willpower you need. You create it.” – Dwayne Johnson 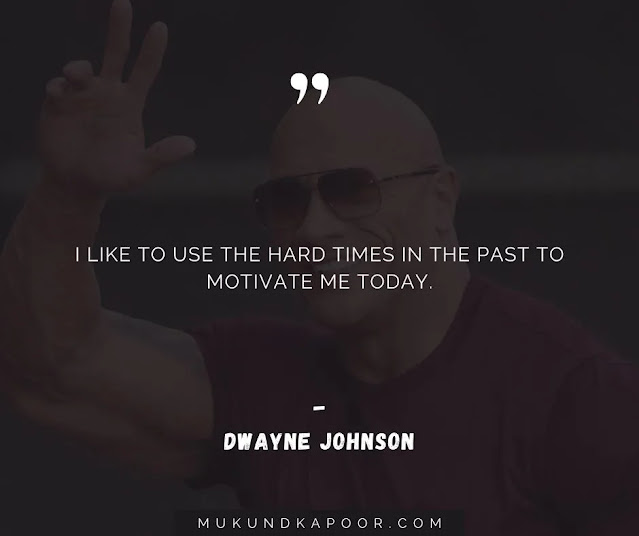 32. “I never want to just play in the game, I want to change the way the game is played.” – Dwayne Johnson

35. “Not only do I think being nice and kind is easy but being kind, in my opinion, is important.” – Dwayne Johnson 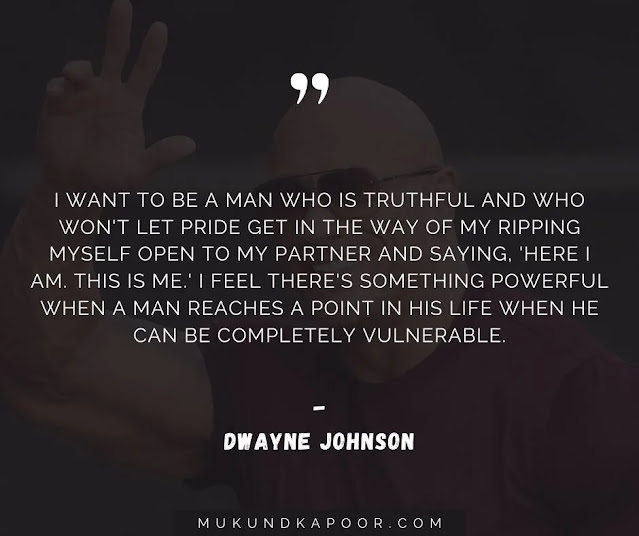 36. “By 23 years old, I failed at achieving the biggest dream of my life. My ass was kicked and I was down, but not out. I refused to give up, got back up, and pushed on.” – Dwayne Johnson

37. “Vision, guts, and enthusiasm. Three qualities I feel you always gotta have to have a shot at success.” – Dwayne Johnson

38. “I have my own special relationship with God you know and certainly uh I feel very blessed I count my blessings every day.” – Dwayne Johnson 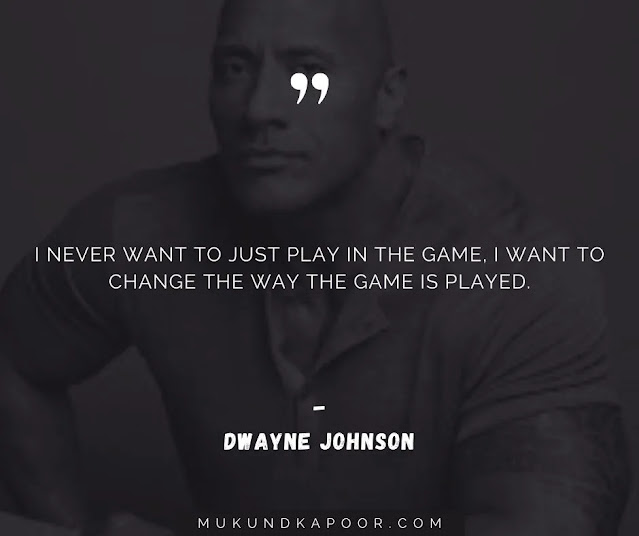 39. “With drive and a bit of talent, you can move mountains.” – Dwayne Johnson

40. “We do today what they won’t, so tomorrow we accomplish what they can’t.” – Dwayne Johnson 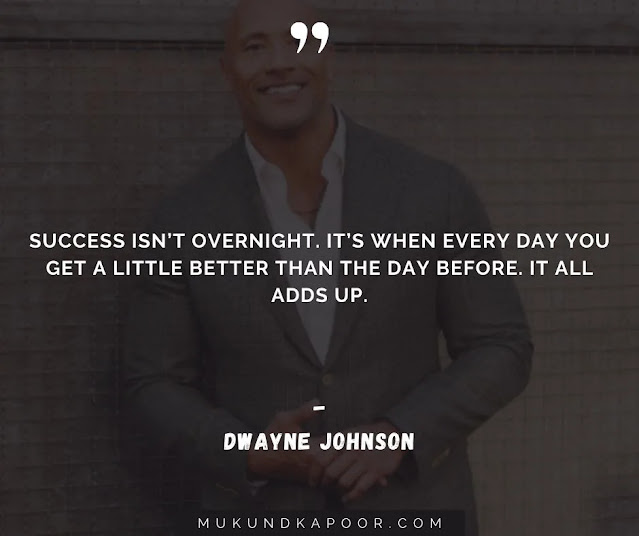 41. “Blood, sweat, and respect. First two you give. Last one you earn.” – Dwayne Johnson

42. “Success at anything will always come down to this: focus and effort. And we control both.” – Dwayne Johnson

43. “Let your actions do your talking for you.” – Dwayne Johnson

44. “I grew up where, when a door closed, a window didn’t open. The only thing I had was cracks. I’d do everything to get through those cracks – scratch, claw, bite, push, bleed. Now the opportunity is here. The door is wide open, and it’s as big as a garage.” – Dwayne Johnson 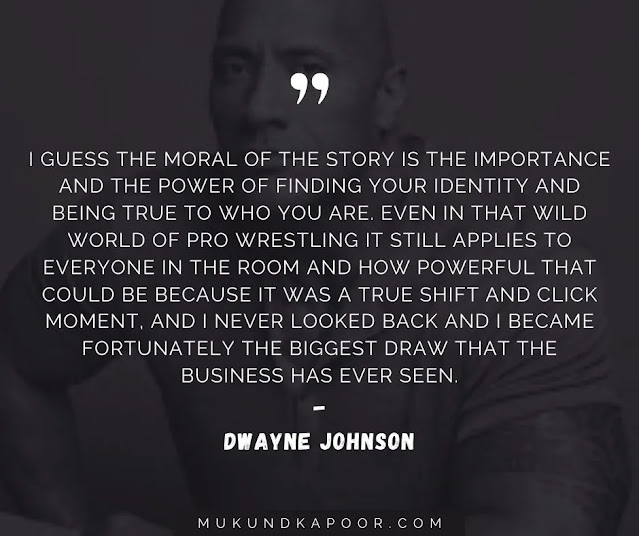 46. “Working late and had only 3hrs sleep when this tornado busts in our bedroom, jumps on me, and pleads with me to get up and take her to my closet (she keeps toys in my closet) to play. We get there and then – surprise – she refuses to play and just wants me to hold her while she makes fart noises. Tired as all hell, but thought ehh there’s gonna come a time, years from now when jumping in my arms is the last thing she wants to do and ain’t gonna be cool anymore — so I’ll always take these moments while I can.” – Dwayne Johnson 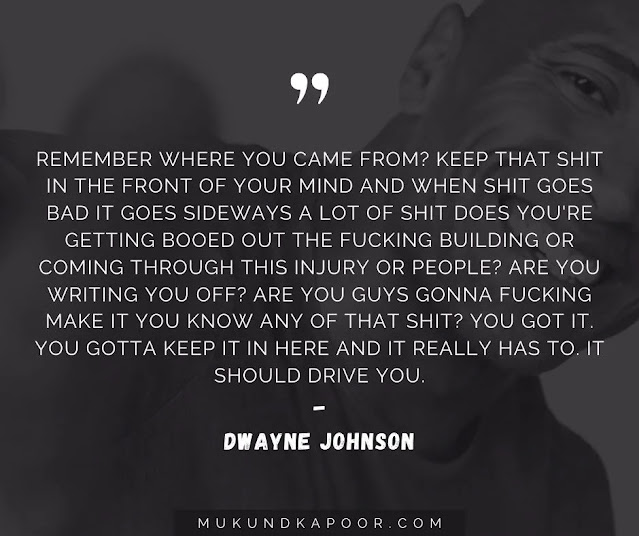 47. “Believe in the idea that you can be anything and everything you want.” – Dwayne Johnson

48. “Never let an opportunity go by, without giving it your all.” – Dwayne Johnson 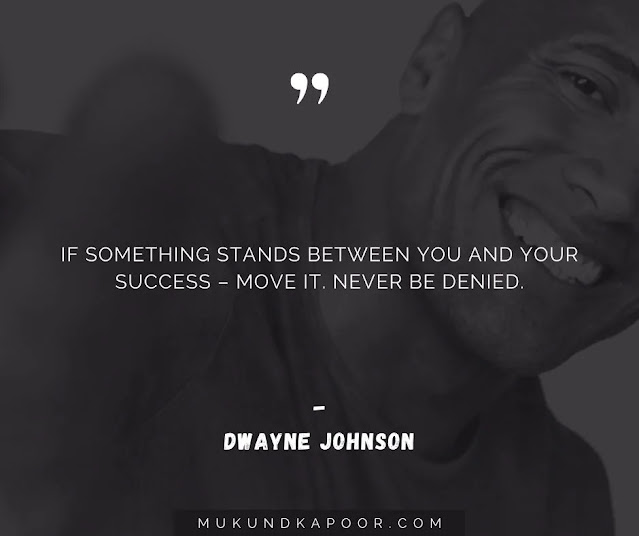 51. “Success isn’t overnight. It’s when every day you get a little better than the day before. It all adds up.” – Dwayne Johnson 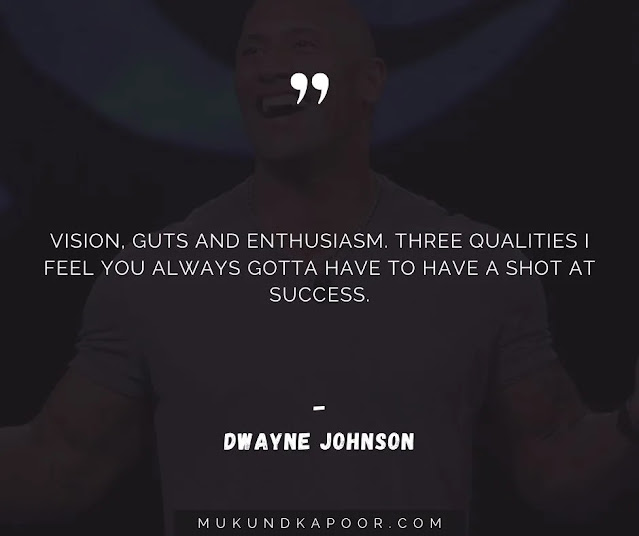 53. “When you walk up to opportunities door, don’t knock it… Kick that b*tch in, smile, and introduce yourself.” – Dwayne Johnson 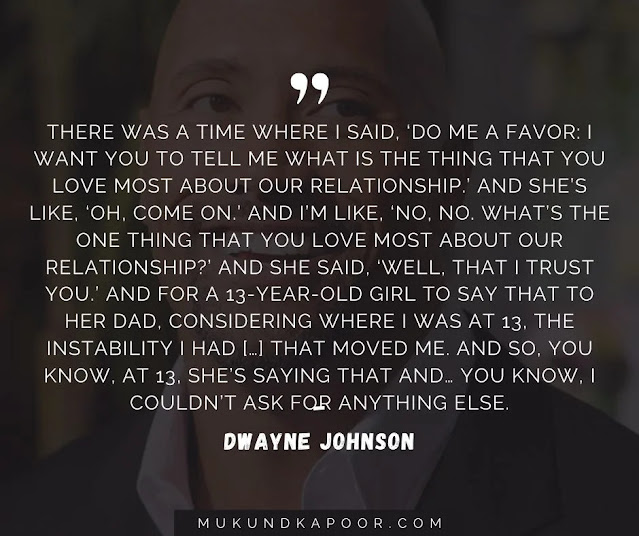 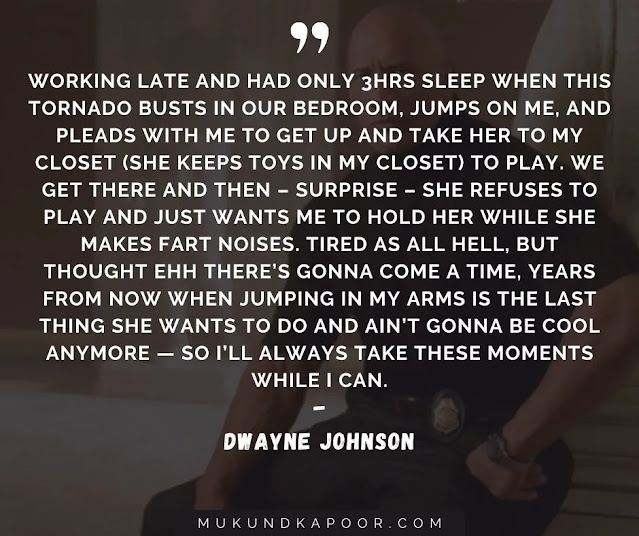 55. “My philosophy is, it’s always very rewarding when you can make an audience laugh. I don’t mind making fun of myself. I like self-deprecating comedy. But I’d like you to laugh with me occasionally, too.” – Dwayne Johnson

Use these Dwayne Johnson quotes to inspire yourself and to get fueled up to achieve your goals and show the world who’s the badass of them all.

40 Devdutt Pattanaik Quotes That Will Blow Your Mind

20 Quotes By Swami Vivekananda That Continues to Inspire Millions