Are our mindset and mentality the same thing? You might be thinking this is a stupid question, but it’s actually one of the most interesting things that you can think of. Mindset and mentality are two different concepts, but they are related in a way that we still don’t understand. 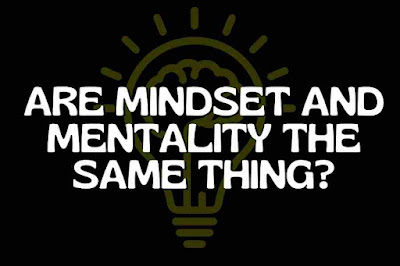 Sometimes people say that mindset is just a set of beliefs, while mentality is how you act on those beliefs. But is it really the same thing? Or can we have both? Well, that’s what we are going to know in this article.

Mindset is the underlying beliefs that a person holds about himself, others and life. It can be defined as a “preconceived idea about how things work, what they are like and what’s possible”.

Mindset is the characteristic mental state of an individual, which can be described as a person’s habitual approach to problem-solving.

It includes their beliefs about how they should act in certain situations and how others ought to behave towards them.

The word “mind” refers to one’s thoughts or consciousness while the term “mental state” suggests that it affects other people or objects around us.

When talking about mindset, you are referring not only to what someone thinks but also to what

they believe themselves and making decisions based on those beliefs.


Related: Growth Mindset – What is it and How You Can Develop it?

The term “mindset” was coined in 1972 by Carol Dweck to refer to how individuals think about their abilities or personalities as either fixed traits (unchangeable) or growth opportunities (changeable).

Also Read:  Hopeless About Your Future? 3 Powerful Tips To Stay Hopeful During The Hard Times

A fixed mindset believes personality traits are simply natural tendencies such as intelligence which cannot be changed over time while a growth mindset believes all people have untapped potential they can develop through dedication and hard work.

Mentality refers to a person’s thoughts and behaviours. It can be defined as “a complex, integrated mental process that guides us through our lives and determines what we perceive, feels about something or someone.”

The term has been used in psychology for years but only recently has it become more widely accepted by people outside of the field.

The meaning of mentality is the state or quality of being mentally active, conscious, and aware. It can also refer to an individual’s mental capacities including their ability to reason and think logically.

Difference Between Mindset And Mentality

Are mindset and mentality the same thing? The answer depends on what you mean by “mindset.” If your definition of “mindset” includes only thinking about yourself, then yes. However if your definition also includes how others perceive you, that’s not true. So in short: no.

In psychology, a mindset is the set of beliefs and attitudes that an individual has about themselves.

It’s how they view their life, what they expect from it, and who or what defines them as individuals. A mentality can be defined as “a pattern of behaviour.”


Related: Difference between mindset and attitude

Mentalities are often formed by our experiences in childhood; for example, some people may have been raised to believe that certain things were wrong while others might not have had any such negative experiences which shaped their perceptions of the world around them.

Also Read:  3 Lessons From Nature That You Can Learn Today

In a nutshell, mindset is the state of a person’s personality and attitude towards life, while mentality refers to how someone thinks.

Hence, mindset and mentality though used as synonyms are not the same. They both have different meanings and they both affect an individuals life differently.


I hope this article helps. Thanks for reading.

6 Astonishing Reasons To Look Within Yourself And Transform Your Life

Hopeless About Your Future? 3 Powerful Tips To Stay Hopeful During The Hard Times