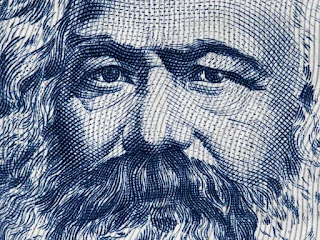 Karl Marx, a philosopher, author, social theorist, and economist was famous for his theories about capitalism and communism.

His theories had a huge impact on societies and are still very influential among modern thinkers in the fields of sociology, and strands of heterodox economics, and because of his extraordinary contribution in these fields many other intellectuals were influenced.

His work worked as a catalyst for the poor working class to come together and defeat Capitalism.

In this article, I have compiled some Karl Marx quotes on capitalism and communism, so let’s get started. 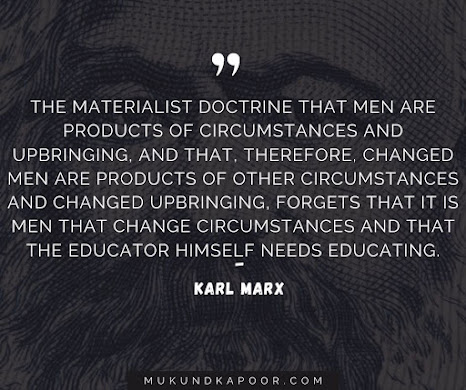 
2. “The oppressed are allowed once every few years to decide which particular representatives of the oppressing class are to represent and repress them.” – Karl Marx

3. “Let the ruling classes tremble at a Communistic revolution. The proletarians have nothing to lose but their chains. They have a world to win. Workingmen of all countries unite!” – Karl Marx

4. “In a higher phase of communist society, after the enslaving subordination of the individual to the division of labor, and therewith also the antithesis between mental and physical labor, has vanished; after labor has become not only a means of life but life’s prime want; after the productive forces have also increased with the all-around development of the individual, and all the springs of co-operative wealth flow more abundantly—only then can the narrow horizon of bourgeois right be crossed in its entirety and society inscribe on its banners: From each according to his ability, to each according to his needs!” – Karl Marx 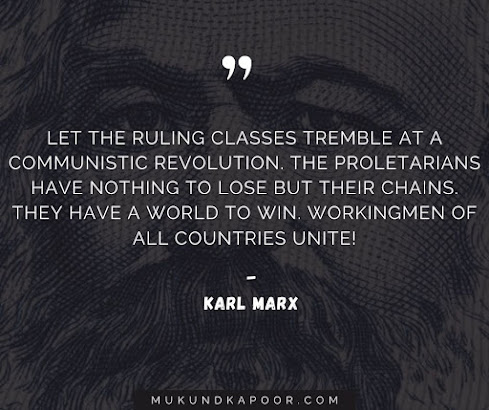 5. “For as soon as the distribution of labour comes into being, each man has a particular, exclusive sphere of activity, which is forced upon him and from which he cannot escape. He is a hunter, a fisherman, a herdsman, or a critical critic, and must remain so if he does not want to lose his means of livelihood; while in communist society, where nobody has one exclusive sphere of activity but each can become accomplished in any branch he wishes, society regulates the general production and thus makes it possible for me to do one thing today and another tomorrow, to hunt in the morning, fish in the afternoon, rear cattle in the evening, criticise after dinner, just as I have a mind, without ever becoming hunter, fisherman, herdsman or critic.” – Karl Marx

6. “The last capitalist we hang shall be the one who sold us the rope.” – Karl Marx

7. “Communism is the riddle of history solved, and it knows itself to be this solution.” – Karl Marx

8. “Communism is for us, not a state of affairs, which is to be established, an ideal to which reality [will] have to adjust itself. We call communism the real movement, which abolishes the present state of things. The conditions of this movement result from the premises now in existence. ” – Karl Marx

9. “But does wage labour create any property for the labourer? Not a bit. It creates capital, i.e., that kind of property which exploits wage labour.” – Karl Marx

10. “Communism deprives no man of the power to appropriate the products of society; all that it does is to deprive him of the power to subjugate the labour of others by means of such appropriation.” – Karl Marx 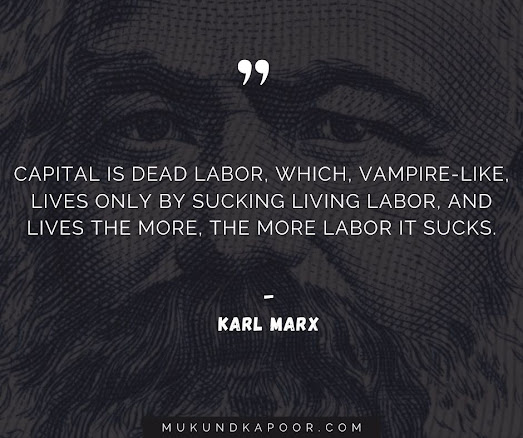 11. “Capital is dead labor, which, vampire-like, lives only by sucking living labor, and lives the more, the more labor it sucks.” – Karl Marx

12. “The theory of Communism may be summed up in one sentence: Abolish all private property.” – Karl Marx

13. “Social progress can be measured by the social position of the female sex.” – Karl Marx

14. “Capitalist production, therefore, develops technology, and the combining together of various processes into a social whole, only by sapping the original sources of all wealth – the soil and the labourer.” – Karl Marx

16. “The more the division of labor and the application of machinery extend, the more does competition extend among the workers, the more do their wages shrink together.” – Karl Marx

17. “The country that is more developed industrially only shows, to the less developed, the image of its own future.” – Karl Marx

18. “Machines were, it may be said, the weapon employed by the capitalists to quell the revolt of specialized labor.” – Karl Marx

19. “Capital is reckless of the health or length of life of the laborer, unless under compulsion from society.” – Karl Marx 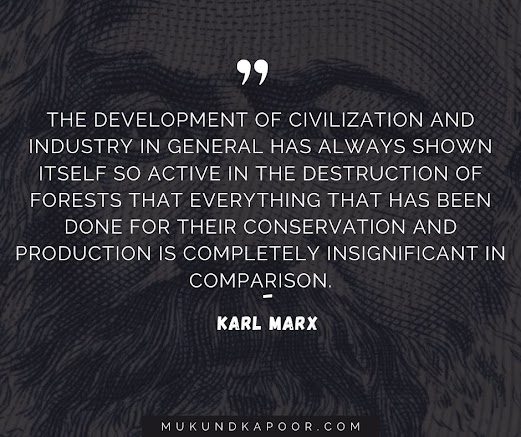 20. “The development of civilization and industry in general has always shown itself so active in the destruction of forests that everything that has been done for their conservation and production is completely insignificant in comparison.” – Karl Marx

22. “When communist artisans associate with one another, theory, propaganda, etc., is their first end. But at the same time, as a result of this association, they acquire a new need — the need for society — and what appears as a means becomes an end. … the brotherhood of man is no mere phrase with them, but a fact of life, and the nobility of man shines upon us from their work-hardened bodies.” – Karl Marx

23. “A few days in my old man’s factory have sufficed to bring me face to face with this beastliness, which I had rather overlooked. …, it is impossible to carry on communist propaganda on a large scale and at the same time engage in huckstering and industry.” – Karl Marx

24. “In communist society, where nobody has one exclusive sphere of activity but each can become accomplished in any branch he wishes, society regulates the general production and thus makes it possible for me to do one thing today and another tomorrow, to hunt in the morning, fish in the afternoon, rear cattle in the evening, criticise after dinner, just as I have a mind, without ever becoming hunter, fisherman, herdsman or critic.” – Karl Marx 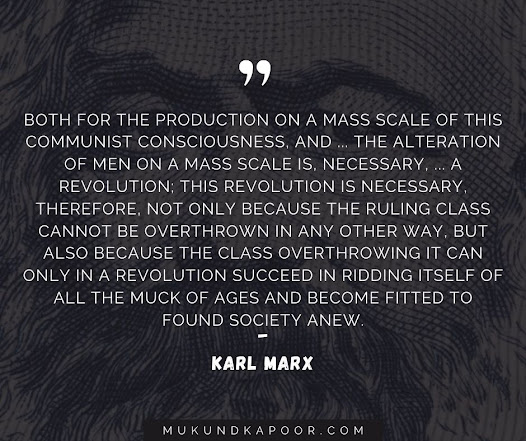 25. “Both for the production on a mass scale of this communist consciousness, and … the alteration of men on a mass scale is, necessary, … a revolution; this revolution is necessary, therefore, not only because the ruling class cannot be overthrown in any other way, but also because the class overthrowing it can only in a revolution succeed in ridding itself of all the muck of ages and become fitted to found society anew.” – Karl Marx

27. “What is Communism? Communism is the doctrine of the conditions of the liberation of the proletariat. What is the proletariat? The proletariat is that class in society which lives entirely from the sale of its labor and does not draw profit from any kind of capital; whose weal and woe, whose life and death, whose sole existence depends on the demand for labor….” – Karl Marx

28. “The wealth of those societies in which the capitalist mode of production prevails, presents itself as “an immense accumulation of commodities,” its unit being a single commodity. Our investigation must therefore begin with the analysis of a commodity.”

29. “As capitalist, he is only capital personified. His soul is the soul of capital. But capital has one single life impulse, the tendency to create value and surplus-value, to make its constant factor, the means of production, absorb the greatest possible amount of surplus-labour” – Karl Marx 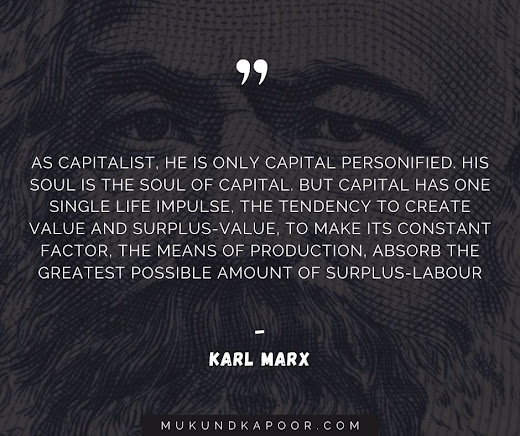 30. “Capitalist production, therefore, develops technology, and the combining together of various processes into a social whole, only by sapping the original sources of all wealth-the soil and the labourer.” – Karl Marx

Did You Like Karl Marx Quotes On Capitalism And Communism?

Karl Marx’s words of wisdom which I have shared with you through quotes have inspired many economists and I wish you enjoy reading these quotes.


Thanks for reading, feel free to comment down below, and do not forget to share this article with your friends.