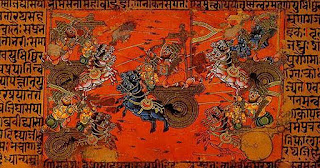 The story talks about karma, love, war, dharma and much more. Mahabharata is not just a normal story it is a pearl of wisdom that only a few seekers understand. Through this article, some of the best Mahabharata quotes on karma, dharma, love and more.

1. “Men experience happiness and misery by turn. No man ever enjoys unmixed happiness. A wise man, possessing high wisdom, knowing that life has its ups and downs, is neither filled with joy nor with grief. When happiness comes, one should enjoy it, and when misery comes one should bear it.” – Mahabharata

3. “Anger is the enemy of men difficult to conquer and covetousness (greed) is the endless desire. A good man is one who seeks the welfare of all beings and a bad man is one who has no compassion or mercy.” – Mahabharata

5. “Men experience satisfaction and hopelessness by turn. No man actually appreciates unmixed satisfaction. An insightful man, having high shrewdness, realizing that life has its good and bad times, is neither loaded up with satisfaction nor with sadness. At the point when joy comes, one ought to appreciate it, and when wretchedness comes one should bear it.” – Mahabharata

7. “You have the right to perform your actions, but you are not entitled to the fruits of the actions. Do not let the fruit be the purpose of your actions, and therefore you won’t be attached to not doing your duty.” – Mahabharata

8. “Once war has been undertaken, no peace is made by pretending there is no war.” – Mahabharata

9. “You see the faults of others, even though they are as small as a mustard seed. But you do not see your own, even though they can be seen as large as a Bilva fruit. … O Duhshanta! My birth is nobler than your own. O lord of kings! You are established on earth. But I roam the sky. Know that the difference between you and me is that between a mustard seed and Mount Meru.” –   Sambhava Parva, Adi Parva

10. “One who does not see impurities in one’s acts, is not expected to see it in another.” – Adiparva

11. “Anger is the most invincible enemy. Covetousness is an incurable disease. He who is friendly to all creatures is honest. And he who is cruel is dishonest.” –   Aranya Parva

12. “I do not blame you, O King, for hitting an innocent man. For, cruelty comes quickly to the powerful.” – Mahabharata

13. “These three people are the golden flowers that blossom on the creeper named Earth – the courageous, the learned and the person who knows to serve.” – Mahabharata

14. “But if a crime doesn’t find a punisher, many in the world will commit crimes. A man who has the power to punish a crime and doesn’t do so, despite knowing that a crime has been committed, is himself tainted by the deed, even if he is the lord.” –  Adi Parva

15. “Revenge is not always better, but neither is forgiveness; learn to know them both, so that there is no problem.” – Prahalad to Draupadi

17. “Abandon all varieties of dharmas and simply surrender unto me alone. I shall liberate you from all sinful reactions; do not fear.” – Krishna To Arjuna

19. “A grey head does not make an elder. …. Not by years, not by grey hairs, not by riches or many relations did the seers make the Law: He is great to us who has learned.” – Astavakra

20.  “I do not blame you, Maharaja, for hitting an innocent man. For, cruelty comes quickly to the powerful.” – Yudhishthira

21. “A man should avoid these six like a leaking boat in the ocean: a teacher who does not teach, a priest who has not studied, a king who fails to protect, a wife who is abusive, a cowherd who wants a village, and a barber who wants a forest.” – Vidura

22. “Once war has been undertaken, no peace is made by pretending there is no war.” –  Duryodhana

23. “Well, I shall now tell you something more. With even a thousand (explanations), one that has a bad understanding succeeds not in acquiring knowledge. One, however, that is endured with intelligence succeeds in attaining happiness, through only a fourth share (of explanations).” – Krishna

25. “Youth, beauty, life, accumulated wealth, health, loved ones none of them are permanent. A wise man will never run behind these.”  – Mahabharata

26. “Those prone to get drunk, get drunk on knowledge, wealth, and good birth; but the same are triumphs of the strict.” – Mahabharata

27. “Draupadi said,-Why, O Pratikamin, dost thou say so? What prince is there who playeth staking his wife? The king was certainly intoxicated with dice. Else, could he not find any other object to stake?

Related:  13 J. Krishnamurti Quotes On God That Will Make You A Believer

The Pratikamin said,-‘ When he had nothing else to stake, it was then that Ajatasatru, the son of Pandu, staked thee. The king had first staked his brothers, then himself, and then thee, O princess.

28. “I am the beginning, the middle and the end of the creation.” – Sri Krishna

29. “A wound inflicted by arrows heals, a woodcut down by an axe grows, but harsh words are hateful? a wound inflicted by them does not heal. Arrows of different sorts can be extracted from the body, but a word-dart cannot be drawn out, for it is seated in the heart.” – Mahabharata

30. “When the Gods deal defeat to a person, they first take his mind away, so that he sees things wrongly. Time does not raise a stick and clobber a man’s head; the power of Time is just this upended view of things.” – Dhritarashtra

31. “Truth was found heavier than a hundred horse-sacrifices. O king, Truth, I ween, may be equal to the study of, the entire Vedas and ablutions in all holy places. There is no virtue equal to Truth: there is nothing superior to Truth. O king, Truth is God himself; Truth is the highest vow.”  – Sambhava Parva

32. “The intoxication with power is worse than drunkenness with liquor and such, for who is drunk with power does not come to his senses before he falls.” – Mahabharata

33. “People who never raise a voice against the injustice in front of them, has no right to live.” – Krishna

36. “Lovely looks, lively heart and sweet words are because of a visitor. Ascending, the host should progress towards the visitor; he should offer him a seat, and properly love him. This is the interminable Dharma.” –   Aranyaka Parva

Related:  27 Be Proud Of Who You Are Quotes To Feel Confident

Mahabharata has some of the most beautiful verses which I have compiled in this article as quotes. I hope these quotes will inspire you and motivate you to live a wonderful life.