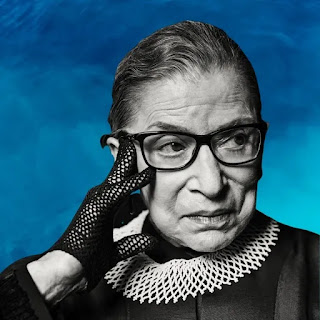 Ruth Bader Ginsburg (RBG for short) was born and brought up in Brooklyn, New York, was an American lawyer who served as a justice of the supreme court of The United States.

Appointed by Bill Clinton in 1993, RBG was the oldest justice who served for more than a quarter-century. She was an iconic and tireless advocate who for women’s right and gender equality.

She was rejected for the supreme court clerkship just because she was a woman she began her legal career as a law professor and became a pioneering advocate for women’s rights and left a huge mark on the law of equal rights for women for which she is and will be remembered.

She served as a justice, even though she was diagnosed with colon cancer and pancreatic cancer, and rejected to get retired.  She was a true feminist who not only fought for women’s rights but also for all human beings.

She was such an inspiring feminist icon that her life story made it to the big screen with a documentary that covered her behind-the-scenes look at her rise and stardom.

Here are 120 powerful and badass quotes by Ruth Bader Ginsburg(RBG )which will inspire you to be a bold opinion maker and a true feminist.

“My mother told me to be a lady. And for her, that meant be your own person, be independent.” – Ruth Bader Ginsburg

“People ask me sometimes, ‘When will there be enough women on the court?’ My answer is: ‘When there are nine.’ People are shocked. But there’d been nine men, and nobody’s ever raised a question about that.” – Ruth Bader Ginsburg

“Women will have achieved true equality when men share with them the responsibility of bringing up the next generation.” – Ruth Bader Ginsburg

“When I’m sometimes asked when will there be enough [women on the Supreme Court] and I say, ‘When there are nine,’ people are shocked. But there’d been nine men, and nobody’s ever raised a question about that.” – Ruth Bader Ginsburg

“Women belong in all places where decisions are being made. It shouldn’t be that women are the exception.” – Ruth Bader Ginsburg

“Women will have achieved true equality when men share with them the responsibility of bringing up the next generation.” – Ruth Bader Ginsburg

“For both men and women the first step in getting power is to become visible to others, and then to put on an impressive show. . . . As women achieve power, the barriers will fall. As society sees what women can do, as women see what women can do, there will be more women out there doing things, and we’ll all be better off for it.” – Ruth Bader Ginsburg

“Reliance on overbroad generalizations…estimates about the way most men or most women are, will not suffice to deny opportunity to women whose talent and capacity place them outside the average description.”  – Ruth Bader Ginsburg

“The words of the 14th Amendment’s equal protection clause—’nor shall any state deny to any person the equal protection of the laws.’ Well that word, ‘any person,’ covers women as well as men. And the Supreme Court woke up to that reality in 1971.” – Ruth Bader Ginsburg

“Indeed, in my lifetime, I expect to see three, four, perhaps even more women on the High Court Bench, women now shaped from the same mold, but of different complexions.” – Ruth Bader Ginsburg

“The side that wants to take the choice away from women and give it to the state, they’re fighting a losing battle. Time is on the side of change.” – Ruth Bader Ginsburg

“I do think that I was born under a very bright star. Because if you think about my life, I get out of law school. I have top grades. No law firm in the city of New York will hire me. I end up teaching; it gave me time to devote to the movement for evening out the rights of women and men. ” – Ruth Bader Ginsburg

“Women’s rights are an essential part of the overall human rights agenda, trained on the equal dignity and ability to live in freedom all people should enjoy.” – Ruth Bader Ginsburg

“The decision whether or not to bear a child is central to a woman’s life, to her well-being and dignity. It is a decision she must make for herself. When the government controls that decision for her, she is being treated as less than a full adult human responsible for her own choices.” – Ruth Bader Ginsburg

“My mother was very strong about my doing well in school and living up to my potential. Two things were important to her and she repeated them endlessly. One was to ‘be a lady,’ and that meant conduct yourself civilly, don’t let emotions like anger or envy get in your way. And the other was to be independent, which was an unusual message for mothers of that time to be giving their daughters.” – Ruth Bader Ginsburg

“My mother told me two things constantly. One was to be a lady, and the other was to be independent. The study of law was unusual for women of my generation. For most girls growing up in the ’40s, the most important degree was not your B.A., but your M.R.S.” – Ruth Bader Ginsburg

“Actually, there is no biological connection whatsoever between the function of giving birth to and nursing a child and the function of washing its clothes, preparing its food, and trying to bring it up to be a good and harmonious person,” Moberg wrote. “Both men and women have one main role: that of being human beings.” – Ruth Bader Ginsburg

“Feminism [is the] notion that we should each be free to develop our own talents and not be held back by manmade barriers.” – Ruth Bader Ginsburg

“Feminism … I think the simplest explanation, and one that captures the idea, is a song that Marlo Thomas sang, ‘Free to be You and Me.’ Free to be, if you were a girl—doctor, lawyer, Indian chief. Anything you want to be. And if you’re a boy, and you like teaching, you like nursing, you would like to have a doll, that’s OK too. That notion that we should each be free to develop our own talents, whatever they may be, and not be held back by artificial barriers—manmade barriers, certainly not heaven sent.” – Ruth Bader Ginsburg

“Reading is the key that opens doors to many good things in life. Reading shaped my dreams, and more reading helped me make my dreams come true.” – Ruth Bader Ginsburg

“If you want to be a true professional, do something outside yourself.” – Ruth Bader Ginsburg

“I had great good fortune in my life to be alive and have the skills of a lawyer when the women’s movement was revived in the United States. And I think my attitude, my aspirations have not changed since the ’70s. My hope for our society that we’re gonna use the talent of all of the people and not just half of them.” – Ruth Bader Ginsburg

“Suppose I had gotten a job as a permanent associate. Probably I would’ve climbed up the ladder and today I would be a retired partner. So often in life, things that you regard as an impediment turn out to be great, good fortune.” – Ruth Bader Ginsburg

“Just think how you would like the women in your family to be treated, particularly your daughters. And when you see men behaving in ways they should not, you should tell them this is improper behavior.” – Ruth Bader Ginsburg

“Our goal in the ’70s was to end the closed door era. There were so many things that were off limits to women, policing, firefighting, mining, piloting planes. All those barriers are gone. And the stereotypical view of people of a world divided between home and child caring women and men as breadwinners, men representing the family outside the home, those stereotypes are gone. So we speak of parent – rather than mother and wage earner rather than male breadwinner.” – Ruth Bader Ginsburg

“We should not be held back from pursuing our full talents, from contributing what we could contribute to the society, because we fit into a certain mold ― because we belong to a group that historically has been the object of discrimination.” – Ruth Bader Ginsburg

“If you have a caring life partner, you help the other person when that person needs it. I had a life partner who thought my work was as important as his, and I think that made all the difference for me.” – Ruth Bader Ginsburg

“In the course of a marriage, one accommodates the other. So, for example, when Marty was intent on becoming a partner in a New York law firm in five years, during that time, I was the major caretaker of our home and child. But when I started up the ACLU Women’s Rights Project, Marty realised how important that work was.” – Ruth Bader Ginsburg

“I have had the great good fortune to share life with a partner truly extraordinary for his generation, a man who believed at age 18 when we met, and who believes today, that a woman’s work, whether at home or on the job, is as important as a man’s.” – Ruth Bader Ginsburg

“Marty was an extraordinary person. Of all the boys I had dated, he was the only one who really cared that I had a brain. And he was always, well, making me feel that I was better than I thought I was.” – Ruth Bader Ginsburg

“How to be Like RBG: Work for what you believe in, but pick your battles, and don’t burn your bridges. Don’t be afraid to take charge, think about what you want, then do the work, but then enjoy what makes you happy, bring along your crew, have a sense of humor.” – Ruth Bader Ginsburg

“The pedestal upon which women have been placed has all too often, upon closer inspection, been revealed as a cage.” – Ruth Bader Ginsburg

“For some reason, people repeatedly have asked RBG when she thought there would be enough women on the court. The question is asinine, her answer effective: ‘When there are nine.” – Ruth Bader Ginsburg

“Sometimes people say unkind or thoughtless things, and when they do, it is best to be a little hard of hearing—to tune out and not snap back in anger or impatience.” – Ruth Bader Ginsburg

“A conversation with her is a special pleasure because there are no words that are not preceded by thoughts.” – Ruth Bader Ginsburg

“I want to be remembered as someone who used whatever talent she had to do her work to the very best of her ability. And to help repair tears in her society, to make things a little better through the use of whatever ability she has.” – Ruth Bader Ginsburg

“My idea of how choice should have developed was not a privacy notion, not a doctor’s right notion, but a woman’s right to control her own destiny, to be able to make choices without a Big Brother state telling her what she can and cannot do.” – Ruth Bader Ginsburg

Ruth Bader Ginsberg is an inspiration for every human being, especially women as one can learn from her the importance of confidence, boldness and right attidtude towards life and a purpose to fight for others.

In her memory, I compiled these powerful and bold quotes by RGB to inspire you and I hope I succeed.

27 Be Proud Of Who You Are Quotes To Feel Confident